In case you missed it, the findings of the Banking Royal Commission were handed down earlier this week.

Given that early on Tuesday, the following were the movements in the ‘Big 4’ banks on our share market (up 4.8% to 7.6%), I think you’ll agree that the ‘market’ thinks that the banks have escaped very lightly indeed. 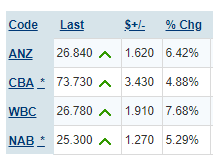 It’s important to remember that the banks (and AMP) were the ones that were caught charging fees for no service, and providing bad advice.

I believe that the share prices have jumped so much, because (a) they have essentially gotten away with a ‘slap on the wrist’ for their greed and/or incompetence, and (b), in what can only be described as a brain fade, the Royal Commissioner has recommended that the entire Mortgage Broker business structure be turned on it’s head. Currently around 60% of the mortgages written in the country are done by mortgage brokers, who compare banks and other lenders for the best deal. If these people’s ability to earn a living disappears, it can only lead to less competition, higher prices and a win for the big banks. This is extremely bad policy, and I wish the mortgage broker industry the best in trying to make the government see sense and not implement this recommendation.

I am glad I’m not a mortgage broker having to have this fight!

I know that there has been a lot of media coverage on the report, so I don’t want to re-hash all of the information here, however I did think it was worthwhile to point out some of the relevant items from a financial advice perspective that will unfortunately increase red tape and drive up costs:

* There will be a requirement for an annual sign off on all advice ongoing fee arrangements between Financial Advisers and Clients.
My response – Whilst I have no issue with having these sorts of agreements in place, as has always been the case, any client can stop paying for advice whenever they choose. So with the exception of this stopping rouge advisers who do nothing for their ongoing fees (not how I operate), all this does is create more red tape and more work for the (vast majority of) advisers who are working as hard as they can for their clients every day.

* Disclosure of “Lack of Independence” to all clients in writing before providing them with advice.
My response – This is a joke. Under the law, if just one client pays me via an insurance policy or super fund, I cannot call myself “independent”. So because of this I will now need to tell everyone that I “Lack Independence”. As I read somewhere yesterday, I look forward to my hairdresser also telling me that she is not independent as she gets paid by me….
Just more paperwork…..
Does a client benefit from this – no..

* There is to be another review of advice in three year’s time.
My response – Sounds like more work for lawyers to me. No doubt it’ll create more red tape..

* Removal of “Grandfathered Commissions”
My response – These commissions are things that exist on older accounts that are really not used anymore (generally only held if there is say something like an attached insurance policy there which can’t be moved due to medical reason). Fundamentally I don’t have a problem with this, however I’d first want to be assured that any benefits flow through to end consumers, and are not kept by the banks that run these products.

* Changes to Life Insurance Commissions
My response – this was proposed a few years ago, and after much debate and consultation the end result was that Australians are vastly under-insured, and the removal of this as a method of paying for advice on insurance would only worsen the situation. It’ll be interesting to see where this finishes up this time.

Anyway, enough from me. I think it is good that we had the Royal Commission, and I am glad that it has put the blow torch on some of the bad eggs in the industry (just as any industry/profession has bad eggs), I just think it is very disappointing that those who were caught (i.e. the Banks), appear to have gotten away so well, and the rest of us will be forced to pay for it via increased red tape, which will lead to increased costs, and which unfortunately could put the price of advice outside the reach of those who need it most.

On a related topic, if you haven’t already seen it, the below is a link to the Commissioner refusing to shake hands when handing over the Royal Commission’s report. I’m not sure what if anything had gone on behind the scenes before this, however my interpretation is that Mr Hayne was just straight out rude or arrogant – isn’t it just common manners to shake hands? Perhaps my parents just raised me better than him – thanks Mum & Dad 🙂